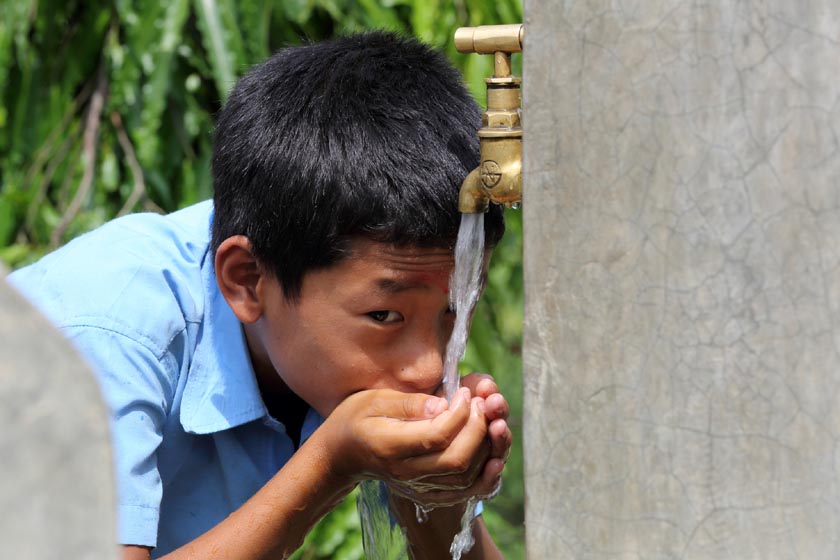 Drinking water contamination is usually not a source of concern if you live in United States, Canada or another developed country. You may not even pay much attention to the water coming from your tap; as long as it’s there and it looks like water, you’re happy.

However, there have been some pretty disastrous water crises where you wouldn’t necessarily expect it.

In May 2000, residents of Walkerton, Ontario experienced Canada’s worst E Coli outbreak that lead to over two thousand people falling ill and seven deaths. The cause was a leak of coliform bacteria from surface water into well water and unfortunately the public was not informed proactively.

There are no real warning signs for the presence of E Coli in your water, other than a water quality report from your water treatment plant or your own at-home water test.

Last May 2015 in North Carolina, United States, high levels of toxic heavy metals were found in the vast majority of wells near Coal Ash Pond. Unfortunately they were dealing with these contamination issues for over a year after an ash spill, leading to disproportionate cases of brain cancer and tumors in the surrounding area. Although some metals can leave a metallic taste in your water, others may not leave an obvious trace.

In April 2014, citizens of Flint, Michigan saw some of the most negligent behavior in maintaining a public water supply in the United States. After officials decided to change the city’s water supply to a highly polluted river in Flint, it lead to a substantial amount of lead leaching into the public’s water supply, along with levels of E coli and coliform bacteria.

Over the course of about a year, the residents were exposed to high levels of lead, resulting in lead poisoning in young children and a slew of criminal charges and lawsuits. Lead is often odorless and tasteless when found in your tap water, so without a proper water test it is difficult to determine its presence. However, overtime it would harm/decay other metals that come in contact with it.

In many of those cases by the time the public is notified of a contamination that threatens their health and safety, some (if not plenty of) damage has already been done. There are often delays in informing the public for a variety of reasons, such as testing times, bureaucratic red tape, and public relations concerns.

Although these crises are not a regular occurrence, they happen often enough that taking some proactive measures and heeding certain warning signs that your water might be contaminated is certainly justified.

You might believe your water may be contaminated if it cloudy coming from your tap. Ironically, this is a common occurrence in tap water, and it is not likely a sign of contamination. It is much more likely to be tiny air bubbles from a bit of trapped air in your water supply.

One way to test this is to fill a glass with water and let it sit for a few minutes. If it clears up from the top to the bottom then it was just air bubbles. If it doesn’t clear then it could also be an indicator of dirt, sand, clay, or methane gas, none of which are typically life-threatening if ingested.

However methane gas is flammable and could cause asphyxiation, but that is only in very high quantities.

In addition to the case studies mentioned above, you should be more concerned about your tap water if you notice any of the following:

Oil/gas odour: this could indicate that your water is contaminated with gasoline or semi-volatile compounds, which can have negative health effects in the long and short term depending on your exposure.

It is particularly dangerous if you are pregnant, so in this case if you can smell chlorine in your water you should stop drinking from the tap immediately.

Bleach/chlorine-like odour: evidently this is an indicator that there is chlorine in your tap water. Although it is commonly used as part of the treatment system in many municipal water plants, many studies have reported that persistent exposure to chlorine can lead to illnesses such as cancer or heart disease in the long term.

If your water is treated with chlorine, you may want to consider a filtration system that will help get rid of this contaminant.

Blue-green stains on sinks/fixtures and/or a metallic taste: this could signal the presence of copper in your tap water. At high exposures, copper can cause anemia, digestion issues, or liver and kidney damage.

If you suspect that there is copper in your tap water you should get it tested right away. Certain filtration systems such as reverse osmosis can also help remove this metal from your water.

Sharp chemical taste: tasting something like this in your water could mean that there are pesticides in your tap water. Pesticides can be very toxic beyond “safe levels,” leading to significant DNA damage, such as cancer, birth defects, immunodeficiency, and pulmonary issues.

If you suspect there are unsafe levels of pesticides in your tap water you should stop drinking it (especially if you are pregnant) until you test it.

There are many harmful contaminants such as lead, that do not have a taste, odour, or residue. That is why no matter how diligent you are, you should always test your water regularly, check any information/reports from your municipal water plan, and implement the appropriate filtration systems as needed.

About the Author: Chelsey Konya